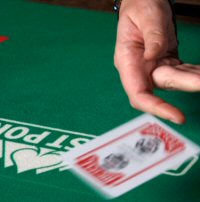 As crazy as that will sound to novice poker players, it’s the truth. Ask any successful pro how often they fold, and they’ll tell you at least 90% (usually more) of their hands get thrown away—some as early as pre-flop, others as late as the river.

Folding isn’t just a way to divest of bad cards. It’s one of the fundamental strategies of poker. Good hands, bad hands, muck ’em all! Okay, maybe not all of them, but probably a lot more than you’d like.

The Quizzical Art of Folding in Poker

Most people think folding is what you do when you don’t like your cards. It isn’t just non-players or novitiates, either. Some people play poker for years before they discover the true art of folding. It’s not usually until they’re introduced to a live table where the calmest player with the biggest chip stack is folding hand after hand with a genuine smile on their face, that they realize there must be something to it.

How can this player be so happy folding their cards, hand after hand, hour after hour? Because they are the one winning the most chips. They don’t play very many hands at all, but when they do, they win.

I like to think of folding as an art form with ties to “classic impressionism”. The player is impressing upon their opponents that they will fold any and all bad hands. Thus, the impression is understood that, when this player doesn’t fold, they mean business. They have something good, something great, probably the nuts!

That’s not always the case, of course.

It could be a total bluff on the folders part. For the most avid folder, that’s rarely the case. Get caught bluffing, and your bluffing days are over. So, when this player bets—or worse, raises—those smart enough to pay attention will be very cautious about making the call.

The hardest part of being an emphatic folder is sticking to your guns. It can be so hard to put down 10-9, 8-Q suited, or even an Ace. But the more you do it, and the more you find your profits rising, the more you’ll come to appreciate this fantastic art, unraveling the quizzical mystery of its power.

Imagine folding a set of Aces on the river, just because the other guy placed a bet? It’s hard to conceive for many, but it shouldn’t be. Big-time folders muck hands like this all the time.

Example: You have an Ace, and the flop brings a pair of Aces. Awesome, right? But you don’t react. You check your opponent all the way to the river, watching as four same-suit cards appear in the community chest. What do you do? You check, of course. If he checks back, you probably win the small pot. If he bets, you fold.

No one is the wiser. They’ll all think you made it that far cause it cost nothing to do so, then folded crap—an appropriate choice. They’ll never know you dropped a set of Aces, because you never gave that impression. But you’ll know you made the right choice, and smile along as your opponent with the flush collects the pot.

Tale of a Professional Folder

Famous American poker pro Tommy Angelo has been playing poker for more than 40 years. He’s a veteran of the game, a best-selling author, freelance journalist, and renowned poker coach. He says it took him 10 years of playing before he discovered the art of folding, and it changed everything.

After learning to fold, he went to Vegas and realized all the regular winners there were professional folders, too. He attributes his commitment to folding to the overall success of his poker career; the sole reason he was able to quit his day job and earn a living on the felt.

In his 2017 book, A Rubber Band Story and Other Poker Tales, Angelo describes a typical day at the office:

“My ideal session starts with a sip of coffee, then somebody raises and I fold from the big blind, then another little sip before I fold my small blind, then I take as big a sip as the coffee’s temperature will allow, and I sit up straight, and I get ready to play my button, and I exhale consciously, and most likely fold.”