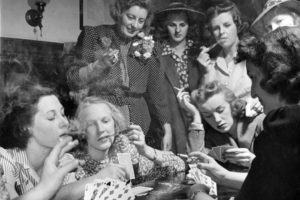 The inaugural WPT Women’s Poker Summit was held on Sunday, August 26, 2018. Its structure is what some are calling a bold experiment on the part of the World Poker Tour, with a single goal in mind. They want to find out why more women aren’t playing poker.

Two decades ago, the answer was pretty clear. Poker was a sport heavily manufactured and dominated by men. It was so male-generated, in fact, that when Linda Johnson won her first WSOP bracelet in 1997, she was surprised to hear no mention of Vera Richmond.

Who is Vera Richmond? Most people don’t know. That’s because, despite being the first woman to win a WSOP bracelet in an open event, no one spoke of her. When Johnson won her bracelet, a short list of women who had previously won a bracelet was mentioned, yet failed to include Richmond. Johnson questioned this, and says she was blatantly told:

“Vera doesn’t get to be in the record books because she’s a bitch.”

Due to a supposed personality flaw determined by the opinions of men who ruled the tournament world, Richmond got no recognition. Quite frankly, Mike Matusow and Phil Hellmuth Jr. are platinum-grade assholes, yet they’re renowned for it.

Thankfully, times aren’t what they used to be. Richmond is now widely recognized as the first woman to win a WSOP bracelet. Many women have seen enormous success on the felt since then, and are rightfully praised for their abilities. Female poker pros like Kristen Bicknell, Liv Boeree, Kathy Leibert and Vanessa Selbst come to mind. Yet still, there’s an undeniable lack of lady poker players.

Angelica Hael, Vice President of Global Tour Management for the WPT, admitted at last weekend’s summit that she may be partly to blame. In a previous interview with PokerNews reporter Valerie Cross, Hael was asked what she was doing to help bring more women to the felt. It was at that moment that she realized she wasn’t doing much.

Yes, the WPT holds a lot of ladies’ events and ladies nights, and recently re-branded the Royal Flush Girls to the Royal Flush Crew. But as far as encouraging more women to play, Hael didn’t really know what to say. That’s when she and her fellow WPT organizers went back to the drawing board and came up with the concept of the WPT Women’s Poker Summit.

In coordinating the event, they found some interesting statistics. Only 3-5% of the entries for high-buy-in events come from female poker players. The figures are only slightly higher for low- to medium-buy-in events. Interestingly though, the Zynga online poker platform caters to a 25% female player base.

All attendees of the summit were asked prior to the event why they believe so few women are playing poker. A vast array of responses came pouring in, which Hael and her team grouped into three categories:

As the summit got underway, participants were divided into groups and asked to come up with different reasons that could be aligned with each category. They were also asked for possible solutions to each problem identified. Needless to say, the first half of the task was easier than the second.

The three most prominent problems in this category turned out to be:

Several solutions were posed, but the most likely to succeed would be the enforcement of a zero-tolerance code of conduct policy. Furthermore, if misconduct occurs, the ability to send a text message to a member of the floor staff—notifying them of a problem without drawing attention to themselves in the process—was also high on the list of realistic solutions.

Yes, women can join any event men can join, but some tournaments aren’t realistically viable for females; especially mothers. Competing for 14 hours straight isn’t always an option with little ones at home. And even when it is, members of casino management pointed out that women often get judged for ‘neglecting their families’ after a late-night session.

Furthermore, ladies’ events tend to be run alongside other tournaments that are more appealing; specifically lower buy-ins with higher guarantees. This inevitably diminishes participation in the ladies’ events.

Having special ladies’ events and ladies nights is already helping to debunk the notion that women should he home tending to their families. Maryland Live! has seen success with ‘brunch and poker’ events, akin to the ‘wine and painting’ events that are so popular these days.

It was also suggested to develop a website for serious female poker players, where women can support and financially back other women. This idea was a highlight, as it removes the common misconception of ill-intent when women take money from men to back their game.

Society’s View of Women in Poker

This isn’t a problem for today’s more confident women. The truth is, most of today’s female poker pros are tough, confident women who won’t take any crap off anyone, including the men at the tables. The problem is the large volume of women who do care what others say and think. These women—the ones who would play poker otherwise—are the ladies WPT is trying to reach.

Offering more beginner tutorials and discussion groups was a common solution for this, and a good one. But the one that really got the most attention was having the male players help a gal out. When one guy is being rude or demeaning, and the lady calls him out on it, if another guy or two would back her up, expressing their disapproval of that behavior, it just might help put an end to it.

Publicizing the women of poker—not just the young beauties and rising stars, but those of all ages—would also help raise the perception of women playing poker. Kathy Raymond is a phenomenal poker player and beloved grandmother. Fahrintaj Bonyadi, mother of poker pro Farzard Bonyadi, had no trouble blasting through the competition of the WSOP Seniors Event. If these stories garnered more attention, surely more women would come from the woodwork to show off their skills on the live poker felt.