If ever there were such a thing as a perfect poker player, Fedor Holz would win that title, too… 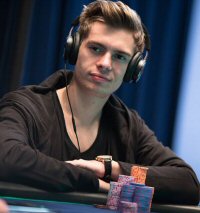 In the realm of professional poker, there’s a basic order of steps in which most excel at the game. They start young. They have early luck, then overplay their hand and learn the hard way that it takes imminent skill to win consistently. They love the game, therefore they take the time to develop that skill, and go on to become the best poker players of their time.

Fedor Holz is the exception. Although he did get his start at a young age, he found instant success, and never let go. He’s a high roller genius, consistent winner at major events, and has bested the most prestigious tournaments in the world, both online and on land.

Now, at just 25 years of age, the young German phenom of the felt has more than US-$32 million in live cashes, 2 WPT titles, a WSOP bracelet, a WCOOP title, and… he’s retired! Learn how he made his immense fortune, and why he no longer considered himself a professional player, in our…

Fedor was born July 25, 1993 in the thriving capital city of Saarbrücken, Saarland; Germany’s smallest state. He was the product of young love and a broken home. His mother was a teen when she gave birth to Fedor; his father little more than a distant postal code. Despite the hardships, he was able to persevere in life, helping to raise two younger sisters along the way.

He was an intelligent child, and performed remarkably well in grade school. It was during that time, around the age of 16—like so many of today’s top pros—that he began playing poker. Nothing too serious back then, but enough to make a little extra cash. Poker wasn’t necessarily a passion for him, but rather an equitable pastime.

Upon graduating secondary school, he went on to college where he studied computer science—another common trait among today’s most successful poker players. Deep in his studies, he wasn’t playing much poker at that time, until he became sick. Fedor was forced to take time off from school, and that’s when he really delved into the game of poker, both on land and online.

He first fiddled around with live tournaments, collecting his first documented cash of $19,288 for a 2nd place finish in the 2012 GPT II Deepstack Main Event in Rozvadov. Next up, he routed the competition in the 2013 Lebanese Poker Tour’s NLHE Bounty for almost $5k. A week later, he won the 2013 WPT Main Event at the Austrian Poker Festival for $17,398, and it’s been all uphill from there.

Holz left his modest lifestyle behind and moved to Austria, where he roomed with a group of fellow poker players. It wasn’t just convenient, but a way to learn from and support one another in their professional journeys. He finished 2013 with 6 more cashes, totaling over $120k on the year.

2014 was another stellar year for the up and coming poker pro. Fedor Holz snagged 7 more live cashes, worth over $200k, including a 1st place, $58k run at EPT Barcelona’s NLHE 8-Max, and another 1st place finish in the Mega Poker Series Main Event for almost $40k.

He also joined PokerStars that year, signing up the now infamous alias “CrownUpGuy”. While his cash game prowess was less than successful, it was Fedor’s online tournament endeavors that earned him fame and fortune in the digital realm. He won the 2014 World Championship of Online Poker (WCOOP) Main Event for $1.3 million, and was named PocketFives Online MTT Player of the Year in 2014 and 2015.

That 7-figure bank was the catalyst for a phenomenal professional poker career ahead. Since then, Fedor Holz has been a regular at major high roller events all over the world, building one of the largest bankrolls in the history of the game. Among his most famous victories are: 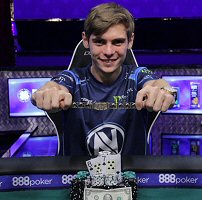 It was two days after young Fedor, at the age of 23, won his first WSOP bracelet in the 2016 High Roller for One Drop that he announced his retirement from professional poker. It was a stunner for the poker world, but one that had to be taken with a grain of salt.

Fedor made it known that he wasn’t going to stop playing altogether. He just didn’t want to pursue poker as a full-time career anymore. He said that, of the 2000-3000 hours a year he played, he only enjoyed about 400 of those hours. Thus, he chose to spend about 400 hours a year on the felt, ensuring maximum enjoyment, without the inevitable pangs of the constant grind.

Clearly, he’s still playing poker, dominating high roller tables all over the world. Just three weeks ago, he finished second in the 2018 WSOP $1,000,000 Big One for One Drop, adding a cool $6 million to his live tournament career earnings; now totaling $32,550,886.

Fedor’s latest $6mm cash pushed him into the 4th spot on the all-time money list, right behind Justin Bonomo, Daniel Negreanu, and Erik Seidel—those last two already being members of the Poker Hall of Fame.

Fedor is one of the founders of the concept that poker is not just a game of skill, or luck, but a game of mindfulness. It was this belief that led him to found the Primed Group in 2017, a start-up company that aims to develop technology to teach people—not just poker players—that success is a state of mind; a goal that can be achieved by tapping into and unleashing the infinite potential of the human brain.

Within that group, Fedor went on to launch Primed Minds, an interactive program that provides immersive life coaching through hypnosis, utilizing captivating audio and visualization techniques.