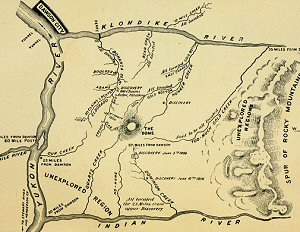 If you were taught the rules of Yukon by a parent, grandparent or otherwise older relative or friend of the family, count yourself among the fortunate few. Most of today’s players were educated by card gaming books or internet websites (much like this one).

Yukon is such an old game by Canadian historical measures, with a regionally-restrictive range of popularity, that relatively few families still pass the game down through the generations. Thankfully, it has not faded into history, and is still quite popular among certain crowds.

Speculative History of Yukon in Canada

Why speculative, you ponder? Unfortunately, the precise history of this card game has become muddled over the last century. Some facts are still known, while others we must speculate out of necessity, utilizing educated guesses and outsourcing information to piece together the most believable origins of the game.

What we do know is that the earliest mention of Yukon, by that name and the rules we enforce today, appeared in Vernon Quinn’s 1933 publication of ‘50 Card Games for Children‘. Within this book, Quinn asserts that Yukon can be traced back to an old German card game that was popularized in North America during the Gold Rush era.

As history buffs may know, the California Gold Rush of 1848-1855 brought a surge of people from the eastern United States, which was already made up of an amalgamation of people from every corner of the globe. This eventually led to people of all nationalities stampeding northward towards Alaska and the Yukon to partake in the Klondike Gold Rush of 1897-1899. At the same time, the people of Canada, who were largely made up of northern Europeans, packed their bags and hoisted all the tools they could manage, heading in the same direction.

Somewhere within all these masses were people of Danish, Norwegian and Swedish decent, who brought to the mines a pastime they called Gold Digger. Of course, in their respective languages, it was called Guldgraverne (Danish), Gullgravere (Norwegian) or Guldgrävare (Swedish).

The rules of Gold Digger are undeniably similar to the game of Yukon described in Quinn’s book. The only differences are the value of standard Yukon Jacks (11 points each); the Ace being the lowest ranking card, below 2 (King being highest after Jack); and the breaking of a tie in points being dependent on the player/team that captured the Ace of Spades in the final hand.

It certainly seems presumable, based on all this evidence, that Yukon is a direct descendant of the Gold Digger card game played during the Klondike Gold Rush of the late 19th century. The fact that the descending game’s name became “Yukon” should come as no surprise, either, since that’s where the majority of Canadians did their mining over the following years. And must we consider it a coincidence that the Jacks are trump?

The tale of Leroy Napoleon “Jack” McQuesten (1836-1909) is well known throughout Canada. Jack McQuesten was a famous trader, prospector, explorer and pioneer of the Yukon Territory. He had many nicknames throughout his years, but none so famous as “Yukon Jack”. His is, in fact, the person for which the famous Canadian whiskey, Yukon Jack (aka “The Black Sheep of Canadian Liquors”) was named. I would be shocked if the card game, and its equivalent trump, were derived from his famous adventures.