Mille is a very popular card game in Canada. Originating in Montreal several decades ago, it spread to Toronto in the 1990s, and is now among the most popular 2-player rummy games in the Great White North. If you want to play, make sure you are familiar with the rules of Mille, as it’s almost always played with money at stake.

How to Play Mille in Canada

This game is meant for only 2 players, and requires two identical, standard decks of 52 cards, without jokers. Merging elements of Rummy and Canasta, players strive to meld sets (equal-rank cards) throughout each hand. A hand ends when one player gets rid of all their cards. Score is taken, and a new hand is dealt until the target score of 1200 is reached.

Each card rank has a point value. The points are positive if the cards are melded, and negative if the cards are left in your hand at the end of play. 2s are wild, hence their high value, and aside from being worth the most points, the Queen of Spades and Jack of Diamonds have no other powers.

A dealer is chosen by any random means. This player will shuffle the 104-card deck, then deal 15 cards to each player. The remaining cards are placed face down to form the stock pile. The top card is turned face up to being the discard pile. From then on, the deal alternates back and forth.

Note: On the very first play of a hand, this player can take the face-up card if, and only if, it is a 2 (wild). They do not need to meld the card to take it. This applies only to the first play of the hand.

A typical play will consist of three parts; draw, optional meld, and discard.

Drawing: A player must draw a card from the stock pile, or collect all the cards from the discard pile (see Collecting Discard Pile below), to begin their turn.

Melding: A player may meld any valid sets in their hand. Melding is optional, not obligatory. A player may only meld, or add to the melds, on their own side of the table. They cannot lay off cards on their opponent’s melds.

Discarding: When a player is done, they will end their turn by discarding one card to the discard pile.

In order to take any card from the discard pile, the player must collect the entire pile. The pile can only be collected by melding the top card on the pile, without the use of wild cards.

For example, if a 4 is discarded by the previous player, the next player can pick up the whole discard pile by melding the 4 with at least two other 4s.

It must be a new meld. If a player already has a meld of 4s, they cannot take the discard pile unless they have two additional 4s in hand to meld it with. In this case, all the 4s are combined into a single meld. 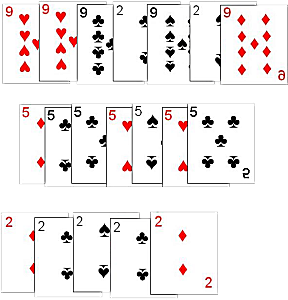 It is also possible to meld a set of 2s. If a player discards a 2, the next player can pick up the entire pile by melding the 2 with 2-2 from their hand. It cannot be used as a wild in any other meld.

A natural set is a meld that contains all eight natural cards, with no wilds. Players receive bonus points for these at the end of the hand. Bonus points are also received if all of a player’s melds contain no wild 2s (melds of all 2s are acceptable).

A hand ends when one player runs completely out of cards. This can be done in one of two ways; either by melding all but one card in hand, then discarding the last card, or by melding all cards and having no card left to discard.

Once the hand is over, the player who went out will add up all the points they’ve melded, and mark it down as their score for the hand.

The player left with cards will add up the positive points from their melds, and the negative points left in their hand, then subtract the hand total from the meld total. If the final tally is positive, it is marked down as their score for the hand. If the end total is negative, it is called a “Chapeau”, and is recorded with a circle around it.

Bonus points are received for a natural meld, such as J-J-J-J-J-J-J-J (no wilds). The point value of the cards in a natural meld are doubled. A natural meld of Jacks would be extremely valuable, as it contains both 50-point Jack of Diamonds, bringing the total points to 320. A meld of eight 2s is also a natural, since they aren’t being used as wilds (worth 320).

Any hand score that involves one or more naturals will have an asterisk (*) marked next to the score.

A bonus is also awarded to a player for using no wilds in any of their melds. A meld of 2s is acceptable. In this case also, an asterisk (*) is placed next to the player’s score.

The first player to reach the target score of 1200 points wins the game. It is possible to win the game, even if you didn’t win the final hand.

If you are playing for stake, you’ll need to do some extra calculations to determine who owes what. This is where the asterisks and Chapeaus come into play. Click here to learn How to Play Mille for Money.

To learn even more about the exciting Canadian card game, check out these additional pages.

Rule Variations for Mille
Advice and Tips for Winning Mille