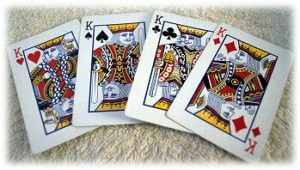 Kaiser is a very popular card game in Canada, but in certain regions, it’s often played with distinct variations to the standard rules. In Saskatchewan, a 34-card game with optional Low No Trump bids is common. In Quebec, some players use a completely different set of 32 cards, with 7s being high, Kings low.

In detailing these common Kaiser variations, it’s assumed you already know the standard rules of the game. If not, be sure to read over our previous segment:

Popularized by many players throughout Saskatchewan, this 34-card variant makes things a bit more interesting. The game is played with a deck of 34 cards, including the 7-8-9-10-J-Q-K-A of all suits, plus the 5♥ and 3♠.

Like traditional rules, each player will have 8 cards following the deal, but this time there are two left over. These two cards are placed face down as the kitty. The player who wins the bid will take the kitty, and may place any two cards back down from his hand, except the 5♥ and 3♠.

With the added benefit of the kitty, the lowest possible bid is 7 (instead of 6).

In this version, players have an additional bidding option of ‘Low No Trump’. When bidding Low, the rank of cards are reversed, (highest to lowest):

Note that the 5♥ and 3♠ are still the lowest rank in their respective suits. The 7 is strongest, and A weakest, otherwise.

Less common rule variations include not having to divulge one’s intentions to play a No Trump hand as “Low” until after seeing the kitty, which means that High/Low No bids are of equal rank. Also, some play where “Low” bids can be made with or without trump.

This version of the game, especially popular in some communities of Quebec, uses an entirely different range of cards. The 32-card deck consists of (ranked highest to lowest):

The 7s are always the highest, and Kings the lowest. The K♥ is the bonus card, worth +5 points. The K♠ is the penalty card, scoring -3.

The cards are dealt in standard fashion, but in this version, each player gets just one chance to bid, with the dealer being last. The lowest possible bid is 4, and the highest 12. If the first three players pass, the dealer is forced to bid 4.

Due to the lower minimum bid in 7s High Kaiser, players do not recognize the ‘No Trump’ rule. A trump must be declared by the winning bidder.

The bidding team scores the full amount of points they capture, so long as they meet the bid. If they fail to capture the bid, they lose the amount of points bid. Because there is always a trump, there is no doubling of scores.

The opposing team will always score all points captured, regardless of the bidding team’s success/failure, or current score.

Want to further your Kaiser education even more? Why not check out some of our additional information on the game?