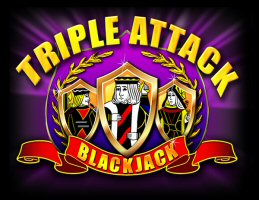 If Blackjack and Stud Poker could get together in the night and spawn a love child, Triple Attack Blackjack would be the result. It’s got all the classic elements of a standard blackjack game, but with the street-style betting of stud poker. Together, they offer quite a delight for strategic card gamers who aren’t daunted by a challenge.

Credit for the production of Triple Attack 21 goes to Galaxy Gaming, a company that prides itself on being “distinctively different”. The game was so well received in its debut at the 2010 Cutting Edge Table Games Conference, it easily won that year’s title of Best New Table Game.

The ability to place consecutive wagers on a hand as it develops presents is a fantastic advantage for players. As such, the rules are modified to slide the favor back into the casino’s corner. The three most notable, negative rule alterations are the Push 22, Blackjack pays 1:1, and use of Spanish decks. These and other modifications (some more player-friendly) are discussed in greater detail below. The end result is a blackjack game with a house edge of 1.18% (RTP 98.82%).

How to Play Triple Attack Blackjack

The bulk of the game mirrors that of classic blackjack. Dealing of the cards takes a bit longer, as each player is offered a chance to make up to three wagers; a.k.a. Attacks.

First Attack: The first wager, mandatorily placed by the player before any cards are dealt.

Second Attack: A second wager, equal to the first, optionally placed after the player is dealt his or her first card, face up.

Third Attack: A third and final wager, equal to the first, optionally placed after the dealer’s hand receives its first card, face up.

Once all attack wagers are finalized, each player and the dealer will receive their second card; face up for players, face down for the dealer. If the dealer has an Ace showing, insurance will be offered, followed by a quick peek for blackjack.

Here are a few other rule modifications you’ll need to be aware of – some benefiting the player, some not.

Insurance Bets: I don’t normally mention Insurance because it’s universally known as a sucker bet, but this one is a bit different. All the standard rules and 2:1 payouts apply, except that the payout increases to 5:1 for a dealer’s suited blackjack.

Push 22: This all-too-common edge-breaking rule states that the dealer’s 22 will push against any active (non-busted) player hand except blackjack.

Blackjack Pays 1 to 1: The usual 3:2 payout has been reduced to 1:1. The player always wins with blackjack, even if the dealer has blackjack too, but only for even money.

Spanish Decks: Triple Attack utilizes 8 Spanish decks of cards. There are no 10s, resulting in each being a 48-card deck (with a lower rate of natural blackjacks).

Six Card Charlie: A single player hand that achieves 6 cards without busting will automatically win. The payout is the usual 1:1.

Splitting Aces: A special set of rules apply to splitting Aces. Once Aces have been split, you have a limited number of options – stand, double or re-split. Some casinos will allow the player to ‘Double for Less’. Others will not. A special Ace Splitting Strategy section covers this in more detail below.

This game comes with three optional side bets. Two of them are the usual hand-condition types of wagers, known as Suited Royals and Triple Match. The third is the Insurance Side Bet, which I’m only covering because it’s not the same old sucker bet we’re all used to.

This is a bet that the player’s first two cards will be of the same suit. If they happen to be suited face cards, or a suited K+Q, all the better.

We’ve all heard that the Insurance bet is a bad one and should never be taken. In Triple Attack Blackjack, the rules and Insurance pay table are different, warranting at least an explanation.

As usual, insurance bets are only offered when the dealer has an Ace or 10 showing. By default, all Insurance bets are made at a cost of exactly half the original bet. Along with the standard 2:1 payout for the dealer having a blackjack, there is an elevated payout of 5:1 if that blackjack happens to be suited.

Is it a good bet? No. You’d think the edge would be lower by these rules, but because Spanish decks are used (face cards only, no 10s), the odds of the dealer having blackjack are lower. Therefore, the edge on the insurance bet actually gets worse, rising from the standard 5.88% to 6.01%

Strategically speaking, there is a lot to be considered when playing Triple Attack 21. Just like a street-betting poker game, every knew card that is revealed will determine whether you should or should not wage the next Attack (increase the bet).

We will first cover when to Attack, and when to refrain from upping your total bet size. The next sections will cover specific strategies for how to play out any hand once all the cards have been dealt, including a special section for Splitting and Re-Splitting Aces.

The First Attack is, of course, mandatory. The Second Attack should only be made if your first card is a 10 or Ace.

The following chart will tell you whether to make a Third Attack, based on your card and the dealer’s up-card. Y = Yes; N = No

Next up is our standard, play-by-play strategy. Because you are able to double down on any number of cards, and automatically win for a 6-Card Charlie, this strategy is unlike most. I’ve created the tables to reflect the correct action with a total value of 2, 3, 4 or 5 cards.

The first and second charts deal with Hard and Soft hand totals, respectively. Each section contains four actions. For example, if the recommended action is H-H-H-D, this means you will Hit with 2, 3, or 4 cards, and Double with 5 cards.
The last section teaches you how to play Triple Attack Blackjack when dealt a pair that can be split. Therefore, only one action is recommended. Please note that there is a complete strategy section below detailing how to respond after splitting Aces.

Due to the extension of Ace splitting rules in Triple Attack 21, I’ve created this special section to help you make the right choice when presented with a pair of Aces. Of course, you should always Split Aces. The question is, what do you do after splitting them? In Triple Attack, your options include: Stand, Double, or Re-Split (if dealt another pair of Aces).

The strategy for this will depend entirely on whether you’re allowed to “Double for Less”. Be sure to ask the dealer about this rule. If you are able to Double for Less, when instructed to do so, always bet the absolute minimum amount allowed.

The following charts detail how to act in any given situation after splitting Aces. The left column depicts the player’s Soft Hand total. The right column lists the appropriate action against the dealer’s up card.