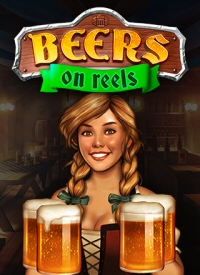 As most of our readers will know, Germany’s Oktoberfest is a centuries old tradition. It’s the world’s largest beer festival, held annually and lasting more than two weeks. Kicking off in September and running through the first week of October, more than six million people visit the festival every year. Now, thanks to Kalamba Games, everyone can get a taste of this traditional celebration, with no need to traverse the globe.

Last week, Kalamba released its newest digital casino game, called the Beers on Reels Slot. The game celebrates the annual Oktoberfest, inviting players to enjoy the atmosphere of an old German pub while spinning the reels towards the potential payout of big wins.

This frothy new slot machine comes with a plus-size 5×4 reel grid and 40 fixed bet lines. The backdrop is an old fashioned pub with a warm fire and inviting ambiance. On the reels, you’ll find wild barrels of brew, frothy mugs of ale, musical accordions, bratwurst kabobs, and fresh baked pretzels. These represent the highest paying symbols, in that order. The low-paying variety are thematically crafted playing card values of Ace thru 9, again valued in that order.

The game’s primary feature is free spins. You’ll trigger 10 of them by landing three or more die kellnerin (beer waitress) scatter symbols. During free spins, all payouts receive a 3x bet multiplier. For every silver coin that appears, +1 free spin is added. 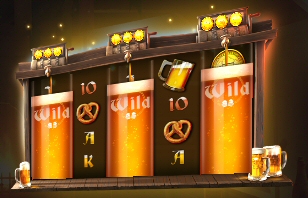 As you play, you’ll notice a there’s a beer tap above reels 1, 3 and 5. For each gold coin that appears on one of these reels, in the base game or free spins, it will fill one of the three coin slots on the corresponding tap. These gold coins are also wilds, taking the place of any symbols except bonus scatters and silver coins. Once all 3 coin slots are filled, the tap is opened and the entire reel becomes a full, frothy mug of wild beer. When this occurs during free spins, any full wild columns will remain in place for the rest of the free spins feature.

A unique feature of Beers on Reels Online Slot is the addition of missions. Completing any mission will award a prize ranging anywhere from 5x to 1,000x the average bet. Each mission involves collecting a minimum number of symbols within a specified number of spins. For example, the Bronze tier reward for 44-54 wilds in 30 spins is 5x. Collecting 180+ gold coins in 30 spins is worth 50x the bet. At the highest platinum tier, 155+ gold coins in 100 spins awards 15x the bet, while 425+ gold coins is worth the max 1,000x. All wilds, including gold coins, beer barrels and full column beer mugs, count towards completion of these missions.

More rewards are paid out for collecting enough high paying symbols, or bonus scatters and silver coins. You can view your mission progress to the left side of the reels. You can press on the “i” next to the missions meter for complete details and tier-by-tier progress.