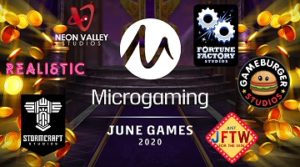 Since the dawn of internet gambling, Microgaming has maintained a reputation for producing new casino games at a rapid pace. For many years, those titles were created in house, with a guarantee of no less than 2 new titles per month. It wasn’t until Microgaming began contracting smaller independent studios to create exclusive content for their iGaming platform that their production rate truly began to flourish.

At first, it was just a modestly noticeable increase in game production. Seven new games one month, five the next. It was respectable, no doubt, yet those numbers pale in comparison to what Microgaming installs on its Quickfire platform these days. And this month, June of 2020, is setting an all new benchmark for the global iGaming industry.

In the first week of June, Microgaming announced a range of new game titles to be integrated on its Quickfire platform before the month is out. Five of those games were highlighted with complete descriptive paragraphs. That alone would have been enough to capture the attention of their audience. But it was the final paragraph that became the real source of jaw-dropping inspiration. It was within this paragraph that Microgaming revealed an additional 20+ games would hit the platform in June alone.

Before I get ahead of myself… Let’s take a quick look at the list of games Microgaming deemed worthy of notable description in this month’s list of releases.

11 Champions: From the creators at Gameburger Studios, 11 Champions is a 5-reel, 20-line, soccer themed video slot with high volatility.

Age of Conquest: Neon Valley Studios presents this game of medieval might and magic. It features 5-reels, 20 paylines, and a medium variance.

Aurora Beast Hunter: The award-winning team at Just For The Win (JFTW) takes us back to the 1990s in Aurora Beat Hunter. It comes with retro graphics across a super-heroine theme that takes place on mixed 3-4-3-4-3 reels and 40 lines.

And that’s just the tip of the iceberg…

On top of those new games, Microgaming states “20+ titles will also be added throughout the month of June by the supplier’s diverse roster of content partners.” The company confided as much after having already detailed its proudest creations of the month (i.e. those listed above).

Microgaming shared no delineating details about these other games. However, they were willing to divulge a few of the titles, and the names of their respective creators. They include:

No doubt, Microgaming is proud to have so many talented teams working to develop brand new slots games for its Quickfire online and mobile casino platform. Some are small, independent studios working exclusively under the Microgaming label. Others are larger firms developing content under their own brand, plus titles just for Microgaming. All are talented beyond measure.