Blackjack on TV: A fading footnote in the history of gambling entertainment. 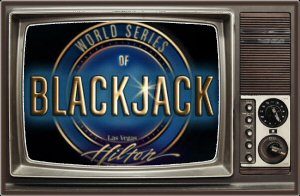 For a very brief period of time, buried somewhere deep in the historical footnotes of the mid 2000s, blackjack games were televised events. If this statement surprises you, don’t feel bad. You’re in the majority. If you blinked, you probably missed it.

Televised blackjack tournaments didn’t quite catch on the way networks and production companies had hoped. It was a good idea, in theory, but a terrible one in action. We’ll take a closer look at the history of televised 21, the types of games viewers were briefly privy to, and why the concept died faster than a hit on 20.

Fleeting History of Blackjack on TV

It all started in 2004, when a group of pioneering producers and directors convinced The Game Show Network (GSN) to invest in a cutting-edge series they called the World Series of Blackjack. The name alone exposes where they got the idea, and why they thought it could be so successful.

The World Series of Poker had been around since 1970, but it wasn’t until the early 2000s that online poker hit its biggest boom – specifically in 2003, when Chris Moneymaker won a $40 satellite on PokerStars, sending him to the WSOP where he won the Championship for $2.5 million.

Suddenly, online poker was attracting millions of players from all over the world, and the WSOP soon became the hottest sporting event on television. Online casino games were popular too. It only made sense that producing seasonal episodes of the World Series of Blackjack (WSOB) would achieve a similar performance.

Like I said – interesting idea on paper, but not so great in reality.

On the bright side, the WSOB was the first and longest lasting televised blackjack tournament. It lasted four seasons. Each season was made up of 8 standard rounds of play, 2 wild card rounds, 2 semi finals, and a grand finale. All of these sessions were pre-recorded and edited into 60-minute episodes.

Every year, viewership was diminishing – not that it was fantastic to begin with. Despite continual alterations to the series, including a 1st place prize that grew steadily from $100k to $500k from start to finish and an increase in the number of celebrity appearances, it just wasn’t working out. The show got the axe. But not before these other shows made their short-lived attempts.

Other Blackjack Shows that Failed

After that failure, GSN was willing to try a whole new blackjack tournament concept called the World Blackjack Tour. Sounds a lot like the globally renowned World Poker Tour, doesn’t it? Once again, mimicking a successful gambling activity wasn’t going to make it popular among the viewing public. That one started, and ended, on September 4, 2006, with the airing of its sole, pilot episode.

Determined that depicting blackjack tournaments like poker could be a valuable form of entertainment, online poker giant of that time, UltimateBet, sponsored the Ultimate Blackjack Tour. Based on a special tournament style known as “Elimination Blackjack”, this one had more potential than previous attempts. The UBT achieved syndication from 2006-07. Like the WSOB, players had to be invited, or win special satellite tournaments to participate on the show. Also akin to the WSOB, the show failed miserably.

After four years and four major attempts (there were smaller failures not worth mentioning), networks finally gave up on the idea of televising blackjack games and tournaments. It was clear then, as it is today, that no one really wants to watch blackjack on TV.