Some people wonder why there are so many versions of roulette. Most of them only know three versions; American, European and French. And yet, they think that’s a lot. I tend to agree that it’s more than necessary. You could narrow it down to French roulette only, and I would be a happy camper. American roulette’s double zeros are only there to make the casinos more money, and European roulette lacks the more favorable La Partage / En Prison rules of the French version.

What most people don’t realize is that roulette comes in so many more variations than just the regionally defined titles above. Yesterday, we talked about the uniquely branded game known as, Monopoly Roulette Hot Properties. Although its house edge is on par with American roulette—therefore, not a game I would recommend playing for real money—its rules, and particularly its bonus game, are interesting.

Today, will be looking at a much more circuitous variant of the game, known as 100/1 Roulette. It’s got so many numbers, it will have your head spinning faster than the roulette wheel! So many, in fact, that the wheel isn’t even round. It had to be made oval to accommodate the abundance of number slots. Of course, such a design wouldn’t work in real life, which is why you’ll only find 100/1 Roulette online, or as an electronic, touch-screen table game in land-based casinos.

The concept here is actually pretty simple. 100/1 Roulette is played with a wheel and table numbered 1-100. There are no zeros in this game. Instead, five additional green pockets are designed with shapes: circle, square, triangle, star and diamond. Each of these shapes are spread evenly throughout the wheel, and can be found on the left edge of the roulette table’s betting diagram, as depicted in the figure below.

The wheel, as I mentioned before, is laid out more like an oval racetrack, since putting all 105 pockets in a circle would require a rather large wheel; or at the least, crystal clear graphics. That’s something NYX Gaming notably failed to imbue this game with. The graphics are extremely basic. 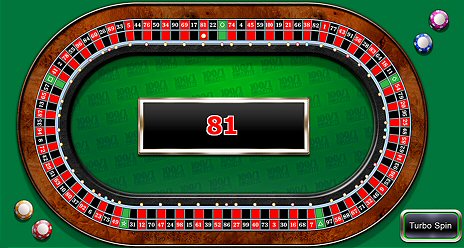 The odds of winning and house edge for each bet varies, due to a rather convoluted pay table. The 100 to 1 payout for a single number seems high, but with 105 slots on the wheel, it’s not so great after all, as the following chart reveals.

While 100 To 1 Roulette does offer a more appealing payout scheme than American roulette, or Monopoly Roulette Hot Properties, it can’t compete with the 2.7% edge on all European roulette bets, nor the 1.35% edge on even-money wagers in French roulette. It may be an entertaining way to play, but it’s not the smartest.