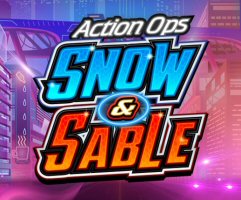 The future is now at Microgaming online casinos, where the high-tech crime-fighting duo of Snow and Sable are cleaning up the big city streets. Join the elite cyber agents as they employ complex gadgets to take on the perils of a fast-paced metropolis.

“This high volatility game offers wins up to 1,000 times the initial bet with a potentially rewarding base game, complemented by a free spin experience that has a high theoretical average return and the ability to retrigger,” adds Reynolds. “We look forward to unveiling more action-packed content from Triple Edge Studios in the coming weeks.

Snow and Sable are a pair of high-tech hero femme fatales with a feline nature; a Cat Woman meets Starsky and Hutch kind of deal. Throw in the unrealistic waistline of Barbie, and the futuristic city-scape of The Fifth Element, and the Action Ops Slot is born.

Triple Edge combines modern and retro elements with this title. Action Ops has a variety of interesting, new-age features and sci-fi graphics, but takes place on a classic 5×3 reel screen with just 10 paylines. The bet range scales from $0.10 to $100, with a max payout of 10,000 coins.

Action Ops has just 9 symbols to look out for. The high paying variety are all tech gadgets. They include the duo’s flying card, a robotic insect, spy glasses and wristband. On the low end are thematic playing card designs of A, K, Q and J. Snow and Sable are both wilds, and the game’s logo is the scatter.

Snow and Sable are the highest paying symbols in the game when lining up alone, and are half as valuable together. They also act as wilds to create winning combos with other symbols. When they both appear on a payline, they become Mixed Wilds. The pay rate for standard symbol combinations using mixed wilds doesn’t change, but when these two pair up for 5 Mixed Wilds on a line, they achieve a 5k coin payout. The game’s highest prize comes from lining up 5 Snows, or 5 Sables (no mixing!), worth the max 10k coins.

When 3, 4 or 5 game logos appear in a spin, it triggers 10, 15 or 20 free games, plus scatter pays of 200, 1k, and 10k coins respectively. During free spins, a pair of 3-high Snow and Sable wilds grace each end of the reels, largely increasing the chance for a big payout. The game comes with a frequent re-trigger rate, as well. Additional scatters can retrigger more free games during the feature. Players receive +5 free spins for two scatters, or +10 for 3. Reels 1 and 5 will randomly shift between Snow and Sable during the free games.

For real money or just for fun, you can try the new Action Ops: Snow & Sable Online Slots at Microgaming casinos like Royal Vegas. 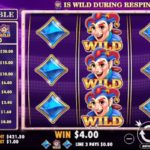 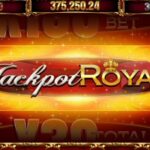