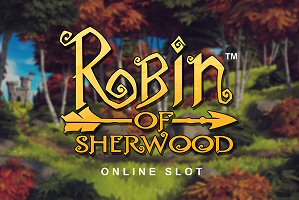 We’ve all heard of Robin Hood and his “merry men”. For centuries, English folklore has told of the legendary outlaw who was an exceptionally adept archer and agile swordsman. Some say he was born of nobility, and that his lands were stolen by the sheriff while he was away. Others say he was born of yeoman stock. One thing all the tales agree on is his affinity for stealing from the rich and giving to the poor.

If you happen to be familiar with these things, chances are your interest is already piquing. In that case, you might be interested to know it was built by one of the digital gaming company’s very first independent studio partners, Rabcat, exclusively for inclusion on the Microgaming Quickfire platform. It’s got 5×3 reels and a minimum $0.20 bet per spin. It’s also been steadily climbing in the ranks among Canadian online casinos for the last month.

Robin Hood is known for his generosity, his chivalry, and his antics with a bow. You’ll find all of these characteristics appropriately infused into Microgaming’s Robin of Sherwood, both upon the reels and throughout the cinematography of its in-game features. The musical score is lighthearted and flattering, as it should be.

The high-paying symbols of the slot machine are, of course, the main characters from the plot; Robin Hood, his arch nemesis, Sheriff of Nottingham, the lovely Maid Marian, Little John and Friar Tuck. The low-end symbols are castle banners of J, Q, K, and A. The trio of arrow heads are the wild, and the archery target the scatter.

Wild Turning can happen after any spin. When triggering, it will randomly choose one or more reels, turning all of the “Royal Symbols” (J, Q, K, and A) on that reel into wilds.

Free Spins trigger uponthe appearance of 3 or more bullseye scatters in any position on the reels. The player receives 10 free spins, playing at the same value (bet size) as the triggering spin.

The Royal Clearing is a guaranteed feature that occurs once every two turns during free spins. After the first two spins, Robin shoots down one of the Royal Symbols, eliminating it from the reels. He does so again on the fourth spin, sixth spin, and eighth spin, removing all low-paying symbol and progressively increasing the potential to line up big wins with the high-paying variety.