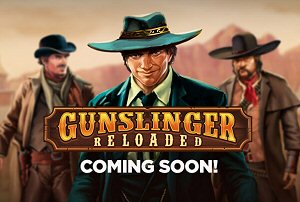 While a barrage of new online slot machines arrive each and every month, it’s a rare treat when one carries a progressive jackpot. That’s what Play’N Go is bringing to the table next week with the upcoming release of its new Gunslinger: Reloaded Slot.

If the name sounds familiar—or if the term “reloaded” didn’t give it away yet—this is a sequel to one of the development brand’s older releases. The original Gunslinger Slot was launched in 2008, and it has always been a fan-favorite among wild west slots themes.

No doubt the new version is going to draw quite a crowd; not just because ten years of technological advancements offer far superior graphics, either. The design team held true to the original theme. They’re delivering a fantastic replay with more innovative features, but the same heart-pounding anticipation of a progressive jackpot.

Aside from remarkably sharper graphics, the new edition is very similar to the original in many ways. The symbols once again include thematic icons like the gunslinger, revolvers, wanted posters, whiskey bottles, and poker cards. As before, the progressive jackpot seeds at 1,000, and continues to grow with each real money spin until it’s won by collecting poker cards to build strong hand values. 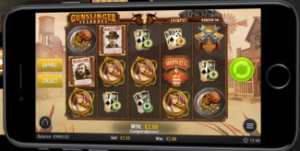 Gunslinger: Reloaded is a 5-reel games with 25 fixed paylines. The wild west slots theme is amplified by a felicitous soundtrack that scales from tranquil to energetic as the game is played. It features two scatters symbols, each capable of triggering a special bonus round.

The first is Free Spins, which trigger by landing 3 or more whiskey bottles. Players receive 10 to 25 free spins for landing 3 to bottles anywhere on the reels. All winning combinations pay with a 2x multiplier during free spins. During the feature, more free spins can retrigger without limit.

Next is the Bounty Hunt Feature. You’ll need to collect enough wanted posters to trigger this game; a multi-level bonus round wherein players track down the outlaw in the poster. The chase takes place throughout the old western town. The further the player gets through the bonus levels, the higher the bounty reward becomes for capturing the outlaw.

All the details sound great, but I haven’t had a chance to play this one just yet. It won’t make its way to Play’N Go online casinos until next Thursday, October 25, 2018. When it does, I intend to be among the first in line to give it a spin.

As for why Play’N Go chose to give this game a complete makeover, that’s a relatively easy question to answer. This isn’t just the 10-year anniversary of the original Gunslinger Slot. That game was actually the company’s very first game release. And it was such a big hit, Play’N Go had no trouble convincing online casino operators to license its software.

The anticipation surrounding next week’s launch is so high that most Play’N Go casinos are pushing the old Gunslinger up to the top of their ‘Feature Slots‘ menu. I recommend giving it a spin while it’s so visible. Once the new progressive online slots game hits the market on Oct 25, chances are the old one will simply fade into the dusty landscape upon which it was themed.