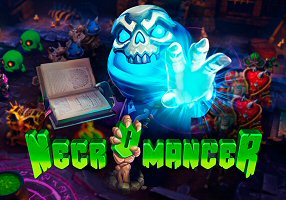 For the last few years, online casino fans have been promised that ‘virtual reality is the future‘ of iGaming. We’ve been teased with a few titles here and there. Microgaming debuted a demo of its VR Roulette in 2015, and NetEnt‘s 2018 recreation of Gonzo’s Quest VR was fantastic. But nothing too notable has come along since.

Today I’m happy to announce that a new VR slot machine has been released. Earlier this week, Evoplay Entertainment launched the Necromancer Slot. It’s got phenomenal graphics and an undead theme that’s perfect for the upcoming Halloween festivities.

Before I continue, I should point out that, while I spent a good while spinning the reels in demo mode in order to deliver a genuine, unbiased review, I haven’t played Necromancer for real money. There are currently just a handful of online casinos that employ Evoplay’s software and accept Canadian players. Those that do are all licensed in Curacao. I’m perfectly willing to risk my extra cash on internet gambling entertainment, but I refuse to risk my personal and financial security by playing at a site that isn’t responsible enough to obtain a license from a regulatory authority with higher standards.

What I love most about this game is the imaginative theme. Evoplay did an excellent job of building characters. The necromancer calls forth his evil, undead minions, who represent the symbols on the reels. Some are spike-armored, skeletal warriors; others are smaller ghosts and mummified creatures. Generally speaking, the size and ferocity of each character will tell you whether it’s a higher or lower paying symbol. The bigger and scarier the better!

Necromancer has a 5×4 reel grid with 40 paylines, but because it’s in 3D, they are set at a unique angle. There are two special symbols—the Jack-o-Lantern Wild, and the Treasure Chest Scatter. Wilds can appear only on reels 2 and 4, substituting for any other symbol except scatters.

Scatters appear only on reels 2, 3 and 4, and only during the base game (not in Respins or Free Spins). When 3 land on the reels, players receive 5 Free Spins. Before each free spin, the necromancer randomly chooses one high paying symbol to clone by dropping it into his boiling cauldron of green goo. This symbol will appear in higher quantity on the reels for the ensuing spin.

Any time a winning combination pays in the base game, it triggers a free Respin. Again, the necromancer will clone one symbol, which will show up in higher abundance during the respin, increasing the odds of another win and subsequent respin.

The VR Aspect of Necromancer Slot

You obviously don’t have to have a virtual reality headset to play the game. The 3D graphics are pretty awesome on their own. I actually enjoyed the game outside VR more than in, although it was a cool experience at first.

The screen is a bit larger than it should be, in my opinion. You can’t see everything that’s going on without turning your head to look around. You can barely see all of the reels at the same time, and have to look pretty far up to see the spin button, bet size, credits, and wins. I think the novelty will wear off pretty quick on this new VR slot machine as most players revert back to the standard desktop and mobile 3D mode.

I also feel like the RTP, which is a bit low at 95.8%, only pays well with larger bets. As I said before, I only played in demo mode, but at the lowest bet size, I spun the reels 35 times without a single winning combination. That’s outrageous! When I upped the bet to $1, I triggered free spins in less than 10 spins. Again, it was only demo mode, but take from that what you will.

With Halloween just around the corner, I’m sure the Necromancer virtual reality online slot is going to get a lot of attention. If you’re in Canada like me, though, I recommend waiting for Evoplay’s platform to get picked up by more reputable sites regulated in Europe. Until then, you can try out the Necromancer Slot Demo here.