Will Delaware’s $7 million in 20 days be enough to induce a Canada single sports betting law?

Sports betting is not illegal in Canada. In fact, we’ve been laying wagers on sporting events for decades. The problem is, we’re limited to ProLine parlays, picking multiple contests and only winning if all of them come to fruition. What we really want is the same sports bets almost everyone else has legal access to. We want straight up bets on single events.

If all the experts and analysts are correct, the recent legalization of sports betting in the United States—and immediate action taken by many states to get sportsbooks up and running post-haste—could be the ultimate catalyst we’ve been waiting for to get the Canadian government moving in that direction.

One particular event that should raise some political eyebrows is reports coming out of the small, gambling-friendly state of Delaware. It’s just one of four US states that offers a legal form of online gambling (outside of lotteries), and was the quickest to launch a sports betting network following the US Supreme Court’s reversal of PASPA. 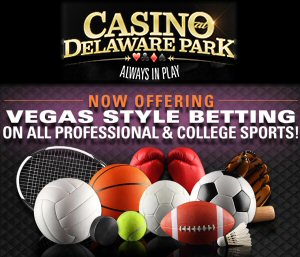 After launching a sportsbook at each of its three land-based casinos on June 5, 2018, Delaware saw over $7 million in wagers come through in the first 20 days. Leading the charge was state governor John Carney, who proudly placed the first legal sports bet of $10. That spurred an influx of sports wagers totaling $7,003,725 from June 5-24.

A little more than $6 million of that was paid out to winners, leaving the the sportsbooks with a win of $875,216. For the record, Gov. Carney was among the winners. That makes him the first bettor, and first winner, of a legal sports bet in the US (outside of Nevada) in the last 26 years.

Delaware is a minuscule state, with a population of just under 1 million, Yet at this rate, it’s on track to record $127 million in wagers in the first 12 months.

If such a small population can generate so much money in sports gambling, just imagine what the results across Canadian provinces could be. Ontario is the most populated province, home to 13.6 million. Another 8.2 million reside in Quebec. British Columbia single event sports betting would cater to 4.6 million residents. There are 4.1 million in Alberta, 2.3 million in the collective provinces of Atlantic Canada, and 1.2 million in Manitoba.

All provinces and territories combined, Canada is home to over 36 million people. And it’s no secret that most of these provinces are in dire need of excess revenue. ProLine wagers in Ontario exceeded $530 million in the 2015-16 fiscal year. Yet the province sees billions more go to sports wagers at overseas online sportsbooks and criminal organizations.

But what if legislators were to pass a Canada single sports betting law? No longer would so many Canadians feel the need to wager elsewhere. The results would be astonishing. And maybe—just maybe—the overwhelmingly lucrative success in Delaware will be enough to open the floodgates for similar legislation in the Great White North.