Everyone wants to beat the casino. Many professional blackjack players have done it. Slots enthusiasts have gotten lucky plenty of times. But there’s a big difference between beating the casino, and cheating the casino. If you think you can cheat them, think again. Unless it’s by illegal means—which is never a good idea!—cheats simply don’t work.

I’ve spent the last few weeks researching so-called cheating tactics. This time, I came across one that states you can cheat Microgaming slots with 9 paylines and a Pick’em Bonus feature. As always, I tried to give the author the benefit of the doubt before simply waving it off as ridiculous. But my investigation came to an abrupt end almost the moment it got underway.

First things first, do not try this at home boys and girls! It won’t work… but before I get ahead of myself… here’s the theory. 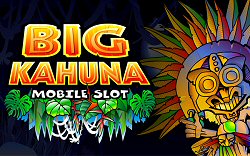 According the cheat I came across, players should choose Microgaming’s Big Kahuna online slot, or any skin of that slot, where 9 paylines are present and a Pick’em Bonus feature can be triggered. The player is then instructed to do something no winning online slots strategy would ever recommend… They’re told to activate only 3 of the 9 paylines.

I’ve seen the bet size per line recommended at three different levels of cost. One said to play for $0.10 or $0.60 per line, per spin. Another said it works at higher levels of $2.50 and up.

Anyway, the whole point is to trigger the Pick’em Bonus. In Big Kahuna, it’s called the Mask Bonus. The cheat suggests that the number of activated paylines will have no effect on the frequency of the bonus feature triggering. Since it doesn’t trigger often to begin with, by paying for only 3 lines, the player will have 3x more chances to spin the reels and trigger the feature.

It actually sounded like potentially good advice, right up until I launched the Big Kahuna Slot…

The very first thing I did was open the game’s pay table, and within seconds, I knew this so-called cheat was flawed. The advice given implied that the likelihood of triggering the Pick’em Bonus would not be effected by decreasing the number of paylines. This suggests that the feature is triggered by a Scatter symbol, wherein landing 3+ anywhere on the reels activates the feature. However, that’s not the case.

The Mask symbol in Big Kahuna (and corresponding symbols in similar Microgaming 9-liner skins) is not a Scatter symbol. The pay table clearly states:

“3, 4 or 5 Mask Symbols on an Active Payline Trigger Mask Bonus”

It’s a statistical (and strategical) fact that paying to activate all paylines provides the highest possible theoretical return to player (RTP) in a slot machine. As such, reducing the paylines by 2/3 could actually reduce your odds of winning anything at all by more than 2/3.