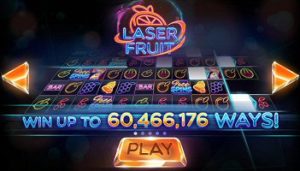 For decades, slot machines were built with a modicum number of bet ways, or pay lines. Classic slots often had just 1, 3, 5 or, at most, 8 ways to line up winning combinations. Video slots increased the number to 9, 15, 25, sometimes 40, 50 or even 100. A few years back, major developers like Microgaming introduced ‘Ways to Win Slots‘, featuring 243 possible alignments, expandable up to 1000+.

“We specialise in bringing players new and exhilarating gameplay experiences and have continued this tradition with Laser Fruit. With over 60m ways to win it breaks new ground and we’ve already seen huge interest from the streaming community.”

The game begins inconspicuously enough, exhibiting the standard 5×3 reels. How can so few reels pay in so many ways, you ask? They cannot. At this point, it offers the maximum 243 ways to win. However, when those lasers become active, they can expand the reel grid to as large as 10×6, wherein the number of potential winning combinations rises to a phenomenal 60,466,176. It also adds up to a max potential payout of 10,000x the bet.

After any spin, the lasers can strike to expand the reels. The direction in which a blue laser arrow points will indicate the direction of the expansion, either right or upward. The laser symbols then convert to other random, high paying symbols. If the spin results in a win, the expansion remains in place for the following spin. If not, the reels reset to 5×3.

When 3+ scatters appear, players are presented with a wheel to spin. The number the wheel lands on – anywhere from 8 to 50 – will indicate the number of free spins to be played. During free games, all reel expansions remain in place for the duration of the bonus feature, greatly increasing the potential for epic payouts. Free spins can be re-triggered up to 10 times.

Live casino streamers have really taken to this phenomenal new 60+ million ways to win online slots games. Audiences all over the world are watching with intrigue as streaming players strive to hit the highest number of pay lines, earning bragging rights for the for the highest number.

Laser Fruit has a 96.02% RTP and high variance, so players would do well to bring a solid bankroll. And be ready to snag a screen shot, because the competition to hit all 60+ million ways to win is going strong!