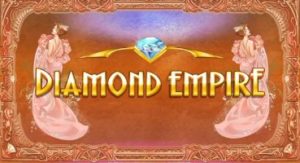 Each month, the world’s leading interactive gambling games developer, Microgaming, showcases something new. In April, the company will be debuting its latest creation, Diamond Empire Slot.

Microgaming is going back to basics with this one, but isn’t leaving all their next-gen, feature-frenzied fans behind either. Diamond Empire is a classic 3-reel slot machine, yet contains many of the entertainment values of more modern video slots games. On top of fine, shimmering imagery, the new Microgaming online slots is equipped with wild multipliers, stacked wilds, and a special wheel bonus game.

This new title transports players back in time to the days of Victorian-dress debutantes, mixed with piano lounge music in the background. It’s a classic 3 reel game with 15 pay lines. Traditional symbols cover much of the pay table, like bars and 7s, along with the game’s namesake diamonds, and a wheel bonus symbol.

The diamonds are the wild in Diamond Empire, and also act as a 2x multiplier for all winning combinations in which they appear. If a pair of wilds combine in a win, their multipliers will act in tandem for a 4x payout. Diamonds can also appear stacked on the reels, increasing the chance of a big win.

The Bonus Wheel symbol will trigger a prize wheel spin when three align on the reels. The bonus game is your standard wheel-of-fortune type prize game. The player spins the wheel one time to win an instant, multiplied amount of the triggering bet. Potential prizes range anywhere from 8x up to 888x the total bet.

When we think of 3-reel classics, we don’t expect too much. Stereotypically, they are the most basic of all slot machines. For some players, that’s all they desire in a casino game. Something that’s simple to play, easy to understand, with unmistakable payouts.

For the most part, Diamond Empire Slot fits that bill, but not entirely. What I like about this game is that Microgaming is finding new ways to incorporate player-favorite features, like multipliers and lucrative bonus games. And they’re doing it without any reduction in simplicity.

The RTP for this game is as yet unknown, but I’m expecting something in the area of 96.1% to 96.4%. That’s where the vast majority of Microgaming online slots have been placed in recent years (aside from lower-paying progressive jackpot slots, which this is not).

Microgaming tags the new title as “A dazzling 3-reel experience”, where “brilliant wins await”. Based on the game’s teaser promo video, published on the official Microgaming Youtube channel earlier this month, it will live up to those labels once it arrives at Microgaming online casinos hardly a week from now. The release date has bee set for Wednesday, April 4, 2018.

I don’t anticipate this one will be a monumental crowd pleaser. It won’t have the universal appeal of other new casino games from Microgaming, like the Halloween Slot, or Phantom of the Opera Slot. It’s more of a niche-market title, likely to attract women in the 40+ age bracket more than anything else. But if simplicity is your style, with some added bonus features along the way, this one’s got it.