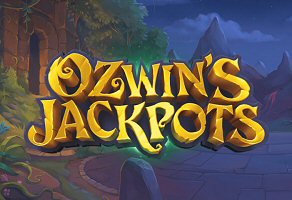 In recent months, each time Yggdrasil puts out a new online slots game, it causes a big stir. Their games have a certain je ne sais quoi that is rarely matched in the digital gaming industry. There’s no specific aspect that stands out, either. It’s the graphics, it’s the back story, it’s the features – it’s everything about them.

For this reason, the hype surrounding Yggdrasil’s Ozwin’s Jackpots Slot is tremendous. The game is set to launch on January 24, 2018. If it’s anything like the company’s recent Pumpkin Smash or Sunny Shores slots, there’s no doubt it will be a huge hit with internet gamblers.

Ozwin is a mighty magician with supreme powers. But for year’s, he’s been under the bewitchment of an ancient evil curse that’s transformed him into an owl. His young apprentice is learning the ways of magic in hopes of freeing his master from the evil spell, breaking the ancient curse and restoring Ozwin to his human form.

As players, our job is to help the mighty wizard and his young apprentice by collecting crystal shards. When enough crystals come together, they restore the magical orbs of power that protect the realm. They also happen to be the key to unlocking the 5 progressive jackpots for which this video slot is named.

Yggdrasil’s deep-rooted plot plays out on a 5 reel, 20 fixed-payline game, optimized for desktop and Android or iOS mobile devices. It can be played for as little as $0.20 per spin, with a max payout of 12,000 coins. That doesn’t include the potential payout for progressive jackpots. 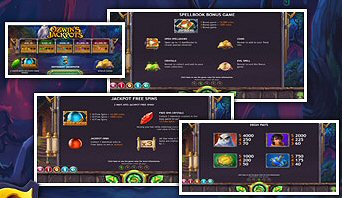 The game’s symbols include Ozwin the Owl, his apprentice, compass, potion, and ornate playing card suits of heart, spade, club, and diamond. There are two scatter symbols in the game. The blue orb scatter can deliver free spins, while the spell book scatter triggers a bonus game.

There are two ways to earn free spins in Ozwin’s Jackpots. During free games, all wins are boosted with a 3x multiplier.

Free spins are initiated when three or more blue orbs appear anywhere on the reels. 10 free spins are awarded. If you happen to land 4 or 5 orb scatters (not just 3), you’ll still get 10 free spins, plus an instant credit prize of 1,000 or 10,000 coins respectively.

Another way to trigger free games is to collect five of the same color crystals in the base game. This creates an orb of that color, and triggers 10 free spins.

This pick’em bonus game activates when three or more spellbook bonus symbols appear anywhere on the reels. Like the blue orbs, players will receive a 1,000 or 10,000 coin payout for 4 or 5 spellbooks. When triggered, the bonus screen reveals a total of 18 books.

The player must choose one book at a time, revealing one of three items within. It could be a crystal shard, coins, or an ‘evil spell‘. Crystals are compiled and added to the current collection. Coins are instantly awarded as prizes. Opening an evil spell will end the bonus game.

There are five progressive jackpots in this new slots game by Yggdrasil. They are labeled Novice, Apprentice, Mystic, Wizard, and Archmage, with each level being worth more than the last. Each corresponds with one of the 5 colored orb. When a player collects 5 orbs of the same color during free spins, the correlating jackpot is released.