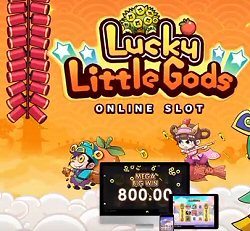 Are the Gods of Fortune shining upon you in 2018? If so, this is one new mobile slots game you’ll want to take a few spins on come February. Microgaming’s development team has put together something special for the Chinese New Year, and it’s due to launch in about three weeks.

We can’t play the game just yet, but the company published its official Lucky Little Gods Teaser Video earlier this month. Based on the details provided, and some extra inside information, we’ll give you a closer look at what’s in store.

My very first impression of this game is that it’s probably the most cartoon-like slot machine I’ve ever seen. For a moment, I thought I was at my sister’s house, where my nieces and nephews watch cartoons all morning. Does the name Ni Hao, Kai-Lan ring a bell? Yeah, it’s like that. Honestly, I was less than thrilled to see something that generally attracts such a young audience thrown into an adult-only video slot machine.

Moving on… Lucky Little Gods is a 5 reel, 243 ways-to-win slot, playable in increments of $0.30, up to $300. Built entirely in HTML5, it’s compatible with all current desktop/laptop and mobile operating systems (Android, iOS, Windows Phone, etc.)

The game revolves around the Chinese New Year and its many symbolic manifestations of good fortune. The reels are set up in the clouds, with hazy temples and pagodas off in the distance. I’m not quite sure how to describe the main characters, at least not eloquently. There’s a fierce young girl wielding a stick, who sends much of her time chasing a rather goofy looking little boy with a sack of gold coins.

There’s also a with a wide-mouthed ruler and ornately-masked deity. As for low paying symbols, instead of playing card values, Microgaming chose Chinese word symbols. The Lucky Little Gods logo is the wild, and can replace any standard symbol in the game. It’s just a basic wild, and won’t multiply your winnings.

This mobile slot machine has several features worth noting. First up is a randomly triggered feature known as the Little Gods Bonus. This one can happen after any non-winning spin. The boy character will race across the bottom of the screen (chased by his fish-riding nemesis), spilling coins from his bag to deliver an instant prize of 4x to 40x the triggering bet.

Next up is the Treasure Pot Scatter Bonus. Whenever the gold, Pokemon-esque pot of coins lands on the third reel, you’ll need to press on it to release its treasure. Doing so awards anywhere from 20x to 100x the stake. 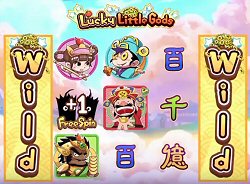 Another feature, the Golden Tree Scatter Bonus, activates in the base game whenever the money tree symbol appears on reels 1 or 5. You can’t miss it – it’s a tree with coins for leaves. (Where can I get one of these?) The tree shakes and coins start falling, paying up to 40x the triggering bet.

Finally, what would any new mobile slot machine be without free spins? You can earn 8, 9 or 10 of them by landing 3, 4 or 5 firecracker scatters anywhere on the reels. Here’s the kicker. During free games, all of reels 1 and 5 will be stacked with wilds. Additionally, every scatter symbol that appears during free games will award +1 free spin.