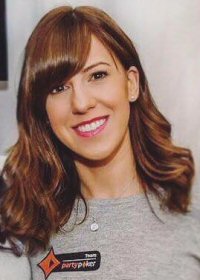 Kristen Bicknell had an amazing year in 2017. She bubbled in 28 live poker tournaments, including two 1st place finishes and a final table appearance at the 2017 WSOP’s $10k 6-Handed Championship. Following a spectacular start to her career via online poker site PokStars around 2005-06, Bicknell banked over US-$500k last year alone.

As such, she’s kicking off the new year with her debut appearance on Poker After Dark. The once-popular television series first aired in 2007, but only survived 7 seasons before vanishing into thin air in 2011. Last summer, the poker TV show was revived by subscription-based PokerGO network, and is returning with a new schedule in 2018.

Since the reprisal last August, Poker After Dark (PAD) has taken on a new approach. Now it hosts weekly themes, and this week’s theme is Femme Fatale. As you may have guessed, Femme Fatale week is all about getting the world’s best female poker players together around the cash table.

PAD kicked off its Femme Fatale week last night, January 4, on PokerGO. Bicknell faces stiff competition as 7 of the world’s most infamous female poker players are taking to the felt in a $100/$200 NLHE cash game. And tonight, they’ll go at it again.

Kathy Liebert is an American poker pro with over $6 million in tournament cashes to date. Kitty Kuo is a force to be reckoned with, as well, consistently cashing in tournaments since 2009 with $1.4 million to show for it. Tracy Nguyen is one of the lowest ranking players at PAD’s Femme Fatale table, yet she had no trouble besting her opponents last night as she came out $60k ahead.

These 7 ladies will go at it again tonight as Poker After Dark’s ladies week continues into Day 2.

Kristen Bicknell, like so many of today’s young pros, got her start playing online poker in the mid 2000’s. Being Canadian, she has no trouble accessing online poker sites (as many of her US-born colleagues do). 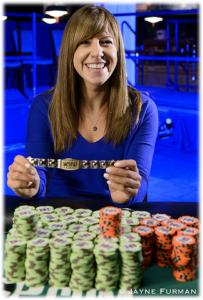 She performed so well on the virtual felt, she quickly worked her way into Supernova Elite status on PokerStars. However, it wasn’t until 2013 that she stepped into the live tournament arena, and that’s when her career really took off.

Bicknell won the 2013 WSOP Ladies Event, claiming her first bracelet and a lofty prize of $173,922. For the next three years, that would remain the highest cash of her career. Then in 2016, the Canadian poker pro proved that she wasn’t just a one-hit wonder by winning the 2016 WSOP $1,500 NLHE Bounty. She took home her second bracelet, and her current largest live tournament cash of $290,768.

Although 2016 was a great year, it pales to her performance in 2017. Bicknell cashed in 28 events all over the world, banking US-$554,034. That earned her the GPI’s title of 2017 Female Player of the Year (#49 overall, including males). Kristen Bicknell isn’t just Canada’s best female poker pro – she’s the best in the world!