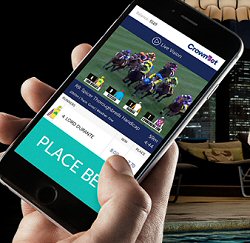 For the last year, Australian casino entertainment group Crown Resorts, has been dumping assets like heavy barrels on a sinking ship. The latest divestment is CrownBet, a mobile sportsbook platform the company owns 62% stake in.

Reports that CrownBet would be the next on the chopping block were confirmed on Friday. Crown Resorts announced an agreement to offload the online betting network for AU $150 million. Sources expect the sale to be complete sometime in February 2018.

The Australian casino group’s 62% stake in CrownBet, along with loans it advanced the mobile sportsbook along the way, will soon become the property of Matthew Tripp. Mr. Tripp is the current CEO of CrownBet, therefore the buyer with the most interest in collecting those shares.

In a statement to the Australian Securities Exchange, Crown said the agreement was subject to suitable financing arrangements. The sale of CrwnBet is just one of a strain of asset dumps the company spoke of on December 14, with the intent of raising an estimated $700 million in capital.

Along with the online betting site, Crown Resorts will also be dumping a vacant lot, real estate and other stocks. Crown Resorts Executive Chairman James Packer will be scooping up one of those divestments himself.

A few years ago, Crown had plans to invest in a Las Vegas casino. The company purchased property for the site, but abandoned the project earlier this year. The vacant lot is now on the market, awaiting the highest bidder.

The company also wants to unload part of its luxury development, the Crown Sydney at Barangaroo. It plans to sell off two residential floors of that property. If all goes according to plan, Mr. Packer will be taking control of that real estate. He’s already offering to pay $60 million for it. The property is still under construction, though. Once complete, it will include a high-roller casino and luxury suites on the middle levels of the high-rise, beneath the floors Packer is looking to acquire.

Last but not least, Crown Resorts owns a relatively small stake in Las Vegas-based Caesars Entertainment Corporation. With its interest in dipping into the US gambling arena off the table, the company is looking to offload that asset as well.

Renovations among the company’s holdings stem from an incident last year with Chinese authorities. Company shares fell hard and fast following the detainment of more than a dozen Crown Resorts staff in China. They were later charged with illegally promoting their casino services to Chinese gamblers. Court proceedings in that matter are still ongoing.

The negative backlash has been palpable for the company. Late last year, Packer went to work eliminating Crown’s ties with Macau, the virtual-Vegas of the eastern hemisphere, and the only city in China where gambling is legal.

He sold all of the company’s stake in Macau-based Melco Crown Entertainment to CEO Lawrence Ho, who wasted no time rebranding the firm as Melco Resorts & Entertainment.

As 2018 approaches, only time will tell what’s next for Crown Resorts now that its previous investments in Macau, the US, and mobile sports betting have been dissolved.