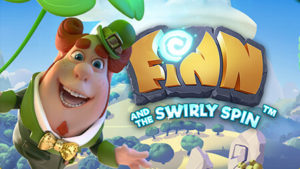 Fans of NetEnt‘s graphically stunning and feature-rich slot machines have been waiting months for the release of its newest game, Finn & the Swirly Spin. The official release date, when all NetEnt casinos will feature the new mobile slot, is set for November 23, 2017. However, LeoVegas secured an exclusive deal with the software brand for an exclusive early release.

Finn & The Swirly Spin wen live on LeoVegas Mobile on November 9. For two full weeks, players have access to the game anytime, on any desktop or mobile device, only at LeoVegas.

As the name suggests, this new NetEnt slot machine has an Irish theme, revolving around a charismatic leprechaun named Finn. The title is kind of long, and a bit of a tongue twister to be honest, so I’ll just call it the Finn’s Swirly Slot from here on out. The name also eludes to adventurous game play, and that’s exactly what it delivers.

NetEnt is famous for its uniquely animated storyline slots, and Finn’s Swirly Slot is definitely another one of them. It’s a 5×5 video slot with a $0.10-$100 bet range and lots of lucky symbolism, including four leaf clovers, acorns, horseshoes and more. It’s packed with features as well, including wilds, 4 different free spin rounds, and multiple random features.

The most surprising aspect is the way the reels spin. Actually, they don’t spin, they swirl. The 5×5 reel grid has a swirling pattern on its backdrop. Instead of the reels spinning vertically and dropping symbols downward, they start on the outside of the swirl and work their way inside to the center. All winning combinations explode, moving the symbols inward until no more wins occur.

The scatters work rather oddly, as well. You won’t need 3 golden key scatters to trigger a feature. Instead, the key must swirl its way into the center of the reel-set on a single spin. When it does you’ll trigger a free spin bonus. There are four in all. The more times you trigger free spins (the more keys you collect), the more interesting the free spin features get.

Each of those add-on features can also be randomly triggered. They can occur at any time, once the swirly reels come to a stop.

Starfall Wilds: At least 2 wilds randomly appear on the reels. If a win occurs, it is paid. If not, more wilds appear until a win occurs.

Irish Luck: An entire line, vertical or horizontal, will turn into a single symbol to guarantee a win.