Microgaming’s Lucky Links Slot, with a new link-locking feature, due for release next week. 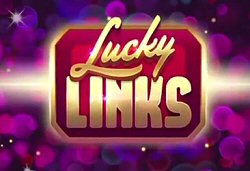 Microgaming has become such a big name in the interactive gaming arena, the company not only puts out new slot machines every month, it has smaller companies doing it for them, too. In the first week of November, players can expect to see a trio of new slots games. One of them, called Lucky Links, is the brain child of a development brand known as Just For The Win.

The Lucky Links Slot has an intriguing new feature known as ‘Link-Locking‘. It’s attached to the game’s Lucky Links logo, and has the capability of triggering re-spins. The slot also comes with the added benefits of paying both directions. But is it enough to attract slots fans to Microgaming’s plethora of online casinos?

With the game due for release sometime next week, there’s not a whole lot of information to go on just yet. Microgaming’s official Lucky Links teaser video didn’t reveal much. Unfortunately, I’m afraid there’s good reason for it. There simply isn’t much to reveal.

Lucky Links Slot has only two notable features. There are no wild symbols, no scatters, no free spins or special bonus rounds to speak of. That’s not necessarily a bad thing, as many of the most simplistic slot machines can be the most rewarding. It doesn’t do much for entertainment value, though.

With that being said, let’s take a look at what the new slots game does have.

Lucky Links is a 5×4 reel, 20 payline game with a bet range of $0.10 up to $250. It has an astral theme and musical score. It feels a lot like a fruit machine, although there’s no actual fruit involved. The first thing worth mentioning (already noted above) is that all paylines pay both directions, left to right, and right to left.

The game’s only other symbol is the Lucky Links logo. It’s not a wild or scatter, as you might expect, but it’s not a standard symbol either. When one or more logo symbols appear on the screen, it triggers the Lucky Links Re-Spin feature. 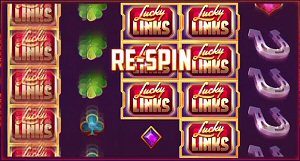 This symbol also delivers payouts for lining up enough on a line. The pays are similar to scatter pays, delivering a multiple of the player’s total bet. However, the payouts aren’t very generous at all. Lining up five of them on a line will only pay 7.5x the total bet. That’s just $0.75 for a minimum $0.10 wager.

I believe Just For The Win would have done better to make the Lucky Links logo a wild. This would have created for much higher payout potential, and increased the entertainment level ten-fold. As it is, those respins don’t mean much, even when they happen to continue long enough to achieve a 5-line of logos.