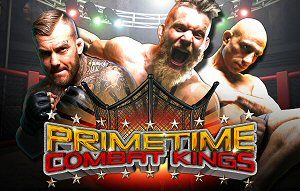 With thousands upon thousands of slot machines on the market already, thematic designers have left no stone unturned. It seems every possible topic has been created, recreated, mimicked, and often sequeled, time and again. Yet there’s one theme that developers have largely overlooked, and that’s MMA slot machines.

Yes, there are a couple of games out there revolving around mixed martial arts, but by no means has the subject been over-composed. For that reason, mixed with high quality graphics and an assortmnt of player-friendly features, Genesis Gaming‘s new Primetime Combat Kings is sure to garner a lot of attention.

Primetime Combat Kings is a 5 reel, 25 line game with exquisite graphic rendering and a high-energy musical score befitting of the theme. Bets range from $0.01 to $2.00 per line, or $0.25 to $50 with all lines active.

The Ring Girl Wild is the highest paying symbol in the game. Players will collect 2000 coins for landing 5 of them. She also plays the traditional role of substituting for all other symbols, outside of scatters. All winning combos assisted by a Wild will receive a 2x multiplier (except for all-wild wins).

The PCK Belt is the scatter. You’ll always know one’s landed by the unmistakable tone of the bell. It awards scatter pays of 2x for 2, 5x for 3, 10x for 4 and 50x for 5, based on the total bet during the triggering spin. It also activates the game’s two special features when 3 or more appear anywhere on the reels. 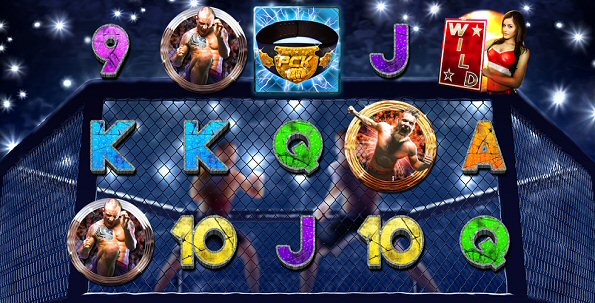 When this occurs, the Ring Wheel Features starts. The screen reveals a wheel with numbers on the outer and inner circle. The outer number relates to the number of free spins the player will receive, while the inner number determines the multiplier. When the wheel stops, the player receives the corresponding numbers of spins and multipliers. Possible combinations include:

Free games trigger when 3 or more scatters appear during the free spins phase. The same number generated in the previous Ring Wheel Feature will be awarded again.

As an underdeveloped niche, this game should easily appeal to fans of mixed martial arts and MMA slot machines in general. It has a surprisingly low volatility, and more than enough features to keep players entertained. On the downside, it has a relatively low RTP for an online slots game. Most digital slots pay 96-97% these days. Primetime Combat Kings only offers an RTP of 94.9%. That could be enough to keep some players at bay.