We Canadians have a lot in common with Australians. Both are known for their good natured hospitality. Our countries are home to a diverse culture, where equality and peace are of utmost importance. We’re also very passionate about our sports. We love our ice hockey, and Aussies view the Melbourne Cup as a national holiday.

We’re not that different when it comes to gambling, either. In Australia, a flutter on the pokies (slot machines) and betting at the track are a way of life. Statistics show that more than 80% of adult Australians participate in gambling, in one form or another, and that up to 3.1% are gambling addicts (1%) or at-risk of developing a problem (2.1%).

Australia has the highest rate of adult gamblers and problem gamblers in the world. However, Canada isn’t as far behind them as you might think. Studies have shown 75% of adult Canadians gamble each year, and that 3% of us are problem or at-risk gamblers.

Perhaps the most notable difference between our nations is that Australia is working hard to address the problem. Officials here at home seem to prefer sweeping it under the rug. Gambling reform, both live and online, has been a major issue of concern in Australia for the last few years. But here in Canada, new casinos are being opened left and right. 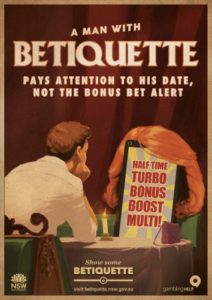 Last week, the government of New South Wales (NSW) launched an anti-gambling campaign called ‘Betiquette‘. The aim is not to convince Aussies that gambling is bad. Rather, they’re educating them on how to maintain control of their betting habits by using humor and 1960’s style marketing brochures.

“A man with Betiquette pays attention to his date, not the bonus bet alert” (on his mobile phone), reads one ad. Another, depicting two men who appear to be relieving themselves side by side in the restroom, states: “A man with Betiquette is never intimidated by the size of this mate’s bet”.

NSW Racing Minister Paul Toole thinks the campaign will “resonate with the target audience, young men”, who make up the vast majority of Aussie sports bettors. “The clever play on words brings a novel and humourous approach to get young men to think carefully when betting on sports so they stay in control.”

Like Australia, Canada’s sport betting industry is immense. Our laws may be more restrictive on how we can place bets, but unlike Australia, there’s no legal control over where we can do our wagering. Homegrown internet gambling sites may limit us to parlays, but offshore online sportsbooks don’t. And they will take any wager, any time, at virtually any size.

I’m all for being able to place straight up bets on hockey, basketball, football, and every other event under the sun. But I do think it’s time our government place a stronger focus on the promotion of responsible gambling.

Until then, all you Canadian sports bettors and casino goers, take a moment to think about your wagers. Don’t be impulsive. Don’t over extend your budget. Show some Betiquette!