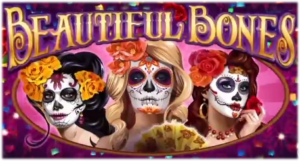 Celebrations of the Mexican holiday, Cinco de Mayo, are about to kick off all across the Americas tomorrow. As such, Microgaming – ever vigilant in its determination to provide new slot machines for every holiday on the planet – has announced the upcoming release of the Beautiful Bones Slot.

Although it wasn’t specifically noted, the graphics and soundtrack certainly seem to suggest a Day of the Dead theme. Unfortunately, while the announcement came in time for the holiday, the new mobile slots game will not. Members of Microgaming casinos won’t have access to Beautiful Bones Slot until Wednesday, May 17.

With the pending release still two weeks away, I obviously haven’t had a chance to play the game just yet. However, an official Beautiful Bones Slot Promo Video, uploaded last week by Maple Casino, provides enough information to give us a good idea of what’s in store for players.

Beautiful Bones Slot is a 5 reel, 243 Ways to Win game with myriad features on the menu, including wilds, scatters, sticky wilds, re-spins, free spins and multipliers. The confetti-draped background and painted faces of the game’s main characters, not to mention a fast-paced, tejano-inspired musical score, are oozing with elements of Mexico’s most festive holiday.

The symbols in Beautiful Bones Slot including five main characters – three females and two males – each ornately dressed for the occasion and donning skull-painted faces. The heart of roses is the Wild, and the jeweled skull is the Scatter. Other symbols include generic card values of A thru 10. 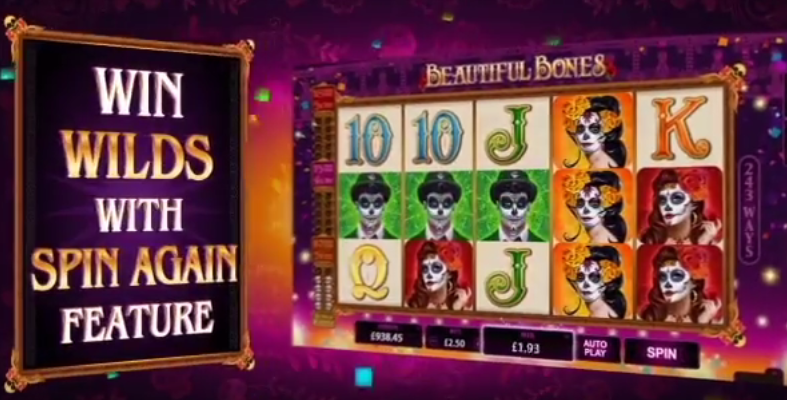 Anytime one of the masked characters appears as 3 in a row in a straight line, up/down or left/right, on the reel (following any potential payout from that spin), the symbols will pull together int a Heart of Roses Wild. The reels will then re-spin with the wild stuck in place. The Spin Again feature is also active during free spins.

The Jeweled Skull symbol is the Scatter, but it doesn’t work like traditional scatter symbols. Every time a sugar skull appears on the reels, it is collected on the Bonus Keeper Meter on the left hand side of the screen. Whether it’s just one scatter, or a whole screen full of them, all skulls are collected until the meter fills enough to trigger the free spins bonus.

I have to admit, I got tired of the music just watching the promo video. It’s a bit too high-energy for me. But I do love the graphics and the overall concept.

I think Microgaming could have found more thematic symbols to replace the playing card values on the reels. Aside from the wild and scatter, the only imagery in the game revolves around decorated characters. A few bottles of cerveza (beer), some colorful ponchos or sombreros, saguaro cactus, a guitar or pair of maracas. Lots of other ways they could have went there.

But I digress… I will definitely give it a whirl when Beautiful Bones Slot goes live on May 17. Until then, adiós mis amigos y tener un feliz Cinco de Mayo!