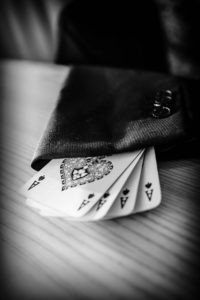 Fifty years ago, it was relatively easy to cheat slot machines. All it took was the right tools, a little ingenuity and a aptitude for covert operations. Now days, the slots have become entirely digitized. You might think that would thwart slot machine cheats, but it hasn’t.

In reality, as these popular gambling devices become more technologically advanced, those with a duplicitous desire to steal from them have learned to adapt. By simply altering their method of attack, slot machine cheats are still able to coerce a cash payout they don’t deserve.

Slot machines have undergone myriad upgrades in technology. In the early days, they were spring loaded machines. Then manufacturers turned to elctro-mechanical devices. Now, everything is digitized, from the computer chips that power them, to the HD quality screens that display them.

Years ago, when slots still accepted coins, those who wanted to cheat the slot machines could do so by inserting a false coin, or slug, into the coin slot. This would trick the machine into thinking it had received a real coin, giving the scammer a free play.

Other, more intricate tools, were also developed for insertion into the coin slot. When properly manipulated, these tools could actually scrape the coins from the hopper into the ejection tray, where winnings were paid out. More sophisticated still were special devices that were used to coerce a slot machine into releasing its entire jackpot.

To better prevent slot machine cheats, manufacturers replaced coin-ops and hoppers with ticket-in, ticket-out machines. Players can still insert bills, but not coins, and the machines only pay out in voucher tickets, or by transferring winnings directly to a player’s account.

The days of cash payouts are long gone. But that didn’t really solve anything…

In today’s age, there are still ways to cheat slot machines. Most people use the bill acceptors, while others try to manipulate the machine’s random number generator (RNG) or gain unlawful access to the casino’s player management system.

The vast majority of today’s slot machine cheats utilize flaws in the bill acceptors. If a machine is programmed incorrectly (or more often, reprogrammed by the scammer), it could misread money, such as interrupting a $5 bill as a $100 bill. Or, it could accept foreign currency in place of local cash.

This sort of cheating is the easiest to detect by casinos and manufacturers who monitor the systems. Even if the scammer isn’t caught immediately, they rarely collect much in the effort.

Altering or Tracking the RNG

More sophisticated slot machine cheats will try to manipulate the RNG. The RNG is traditionally unpredictable, and delivers a large, random sequence of numbers to determine what symbols will appear on the reels. If a player can figure out what numbers are needed to generate a winning combination, they could tell the machine to read a winning sequence of numbers, thereby delivering a payout.

Some even claim to be able to track the RNG to predict upcoming jackpots. A team of Russian scammers actually pulled this off recently, using sophisticated computer programs and a team of watchful players to determine when a slot machine’s RNG was ready to deliver a big win.

The easiest way to cheat slot machines doesn’t actually involve manipulating the slots at all. Anyone highly adept at hacking can do it. The idea is to hack into a casino’s player management system, select a player’s profile, then add casino credits to their account. They can then play the slots for free, and potentially win a lot of money in the process.

Hacking isn’t always required, either. On many occasions, slot machine cheats have been found working in tandem with employees of a casino. So long as one of them works in the player management department, it’s a cinch… until they get caught. Then it’s a nice long vacation in the local penitentiary.